On the Road Again...

I don't know what it is but Mike and I can never manage to leave on time. I mean, we are late every time we head out of town. Today we planned on leaving at 4:00 or 5:00. We left at 8:30 pm. It's a good thing Mike has been working
nights so he is used to being up at this hour. I did drive the first couple hours so he can nap. We are also going to make a stop on the beach of Lake Michigan. We will have a breakfast picnic! I can't wait! Oh and I can't wait for Mackinack Island Peanut Butter Fudge ice cream from Reyba's. Mmmm..... It's a short trip bit ought to be a good one. Family and camping as well. Good times.

Oh yeah - Mike has been driving less than an hour and has already been pulled over. He got a warning. He got lucky.

Please excuse typos. I'm on my phone.
Posted by Rose at 10:55 PM No comments:

Meeting with the Pastor

That was today.  I was very nervous about it for some reason.  Not sure why, it's not like I had a reason to be.  I cleaned my house all day, but it didn't seem clean enough.  swept, mopped, vacuumed, clean kitchen.  Maybe it was the plethora of baby toys that have inhabited our living room.   Either way, I had to make something for him to eat.  I chose poppy seed cake.  It took awhile to bake but turned out great, especially with warm glaze. Mmmmm.... 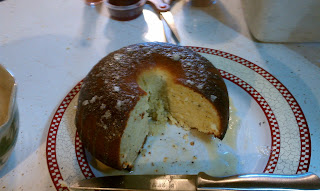 The meeting was uneventful.  We did decide to become members of the church and he explained to us what being a member means, plans for the church, yada yada yada.  As he was leaving, I thought I smelled something burning.  I know it wasn't the cake because I had taken it out of the oven.  I know it wasn't the glaze because I know I had turned that off.  I said goodbye and Mike called me into the kitchen.

Apparently, I forgot to turn off the stove, which resulted in burned glaze and my rice spoon being melted.  That is the perfect spoon and it is melted! I'm so dissapointed.  Of all the things to melt, it had to be THAT spoon!  UGH!  I can't believe I melted a spoon.  The pot is currently soaking and I hope that I didn't ruin our that as well!

On a happier note, Rod was extra cute today - I just love his chubby cheeks! 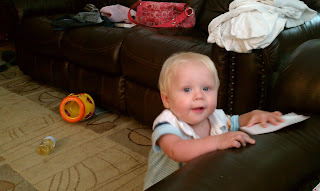 Is the whole coupon thing driving you nuts?

It is making me cazy.  I love couponing.  Growing up, Mom was always clipping coupons.  She wasn't one of those insane ones, but she definitely clipped her fair share.  Thanks to that stupid show on TLC Extreme Couponing people have been going crazy. Say what you want but it is not ok to dumpster dive with your 9 year old just to get a few inserts!  People steal papers or just the inserts, purposefully use the wrong coupons to get it cheaper, and then get mad when they get caught.  Others will clear the shelves leaving nothing for other shoppers.  This is just poor etiquette.
I don't get it. Yes its great to get free stuff, but is it really worth stealing?  I mean, honestly its really sad.  I belong to a coupon groups.  I've been debating leaving them.  Some of the members are not ethical and do not practice what they preach.  They complain about people who steal inserts, but then misuse coupons themselves.  I don't see the difference.  Stealing is stealing, whether its a stick of gum or a car.  It makes no sense to me.  I guess it just bothers me that people feel the need to steal in order to get a great "deal"  I don't know.  I like the groups because I can hear about great deals and sales.  But I don't like them because some of the participants make me wonder how honest they are.
That being said, I've gotten some great deals lately.  I got major discount on women's toiletry, making them .02 cents per box!  Body wash for free, body wash for .26 cents, Free or $1 deodorant, Free shampoo....the list goes on and on.  Some of the items I keep, the rest I'm going to donate.  I don't need a massive stock pile around the house, I just want to be able to save money on every day items.
Ok, thats all I wanted to say.  :)
Posted by Rose at 10:36 PM No comments:

A couple of months ago I tried to blog but discovered that my account was closed.  I emailed google and worked with them for quite some time.  Then one day I hear "why is this account still showing up?  I deleted it?"  What?  Turns out Mike had deleted my account.  He didn't think that anything was attached.  After I got over my initial freak out, I emailed google again.  Well, I'm tired of waiting.  So, while Life with Hot Rod was great, things in life have changed.  Hot Rod is now mobile.  He's crawling everywhere. Gets into everything, and from here on out, I will forever be chasing Hot Rod.  So, that's where the name came from.  Hope to have this up and moving over the next couple of days.
Posted by Rose at 10:55 PM No comments:

Rose
I'm a proud Christian mother of one. His name is Hot Rod and he amazes me every day! I'm married to a wonderful man whom I love and suppot